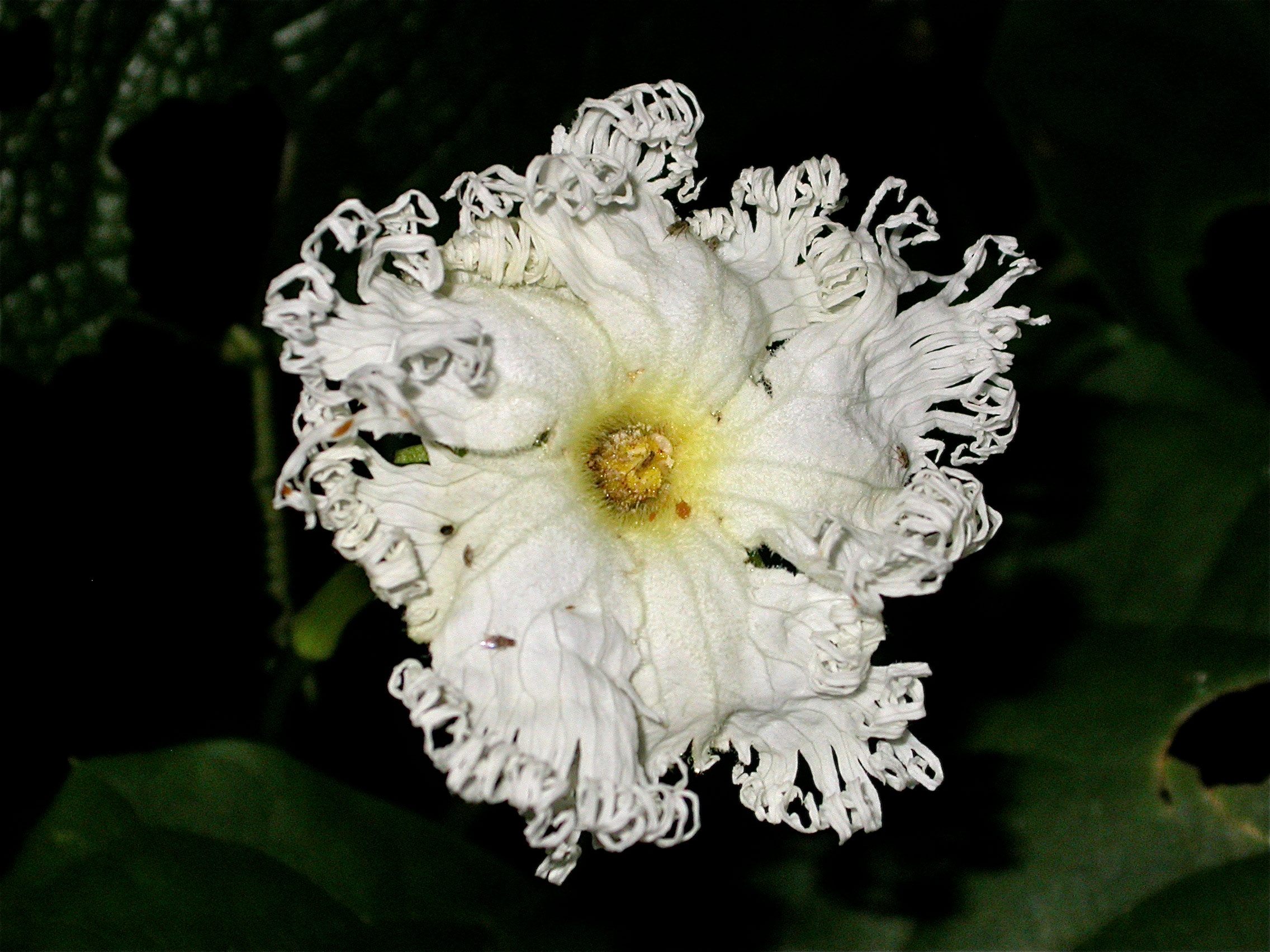 Cucurbitaceae originated in Asia in the Late Cretaceous (Schaefer et al. 2009). The family currently comprises 95 genera with c. 1000 species. Most of the species are distributed in the Tropics and Subtropics, the few species reaching the temperate regions of the world survive the winter as seeds or as rootstock deep in the soil. Its monophyly is well supported by molecular data (Zhang et al. 2006; Kocyan et al. 2007; Schaefer et al. 2009; Schaefer & Renner 2011). Recent studies placed the Cucurbitaceae in a polytomy with Begoniaceae, Datiscaceae, and Tetramelaceae (Zhang et al. 2006), a clade supported by shared inferior ovaries and parietal placentation.

Numerous species of Cucurbitaceae have economic importance, usually as vegetables (Chomicki et al. 2019). The cucurbit crops that are grown most commonly are cucumber, melon, watermelon, and zucchini. More locally important Cucurbitaceae crops include squash or pumpkin (Cucurbita maxima), bitter gourd (Momordica charantia), waxgourd (Benincasa hispida), chayote (Sicyos edulis), casabanana (Sicana odorifera), and Coccinia grandis. Luffa are also used as sponges (see under that genus), and Lagenaria siceraria, the bottle gourd, as vessels in African and Asian cultures (Whitaker and Davis 1962; Erickson et al. 2005; Clarke et al. 2006). Finally, the leaves and shoots of many species are boiled and eaten as a vegetable in both Africa and Asia, and many species play a role in folk medicine.

Cucurbitaceae are mostly woody perennial lianas or herbaceous annual climbers and trailers (very rarely shrubs or trees), often glandular-hairy and usually with one tendril per node inserted at 90° angle to petiole. Many perennial species have tuberous roots or pachypodia, which can reach more than 1 m in diameter (e.g., in Ampelosicyos bosseri and Baijiania yunnanensis). The shoots are usually angulate with bicollateral vascular bundles, rarely ± leafless and succulent. The leaves are arranged in spiral (alternate) position, estipulate, petiolate, membranaceous or succulent, mostly simple and entire or less often palmately or pedately lobed, or palmati- or pedati-compound. Only the first leaves following the cotyledons may be opposite (Trichosanthes) or rarely verticillate (Bayabusua). The tendrils (modified shoots) are simple or branched, with uncoiled stem or less often coiling above and below the branching point. In a few species, the tendrils developed into thorns (e.g., Acanthosicyos horridus) or were lost entirely (e.g., Ecballium elaterium, Cucumis messorius). Sometimes, the tendrils form adhesive pads (e.g., in Alsomitra macrocarpa and many species of Trichosanthes).

Cucurbit flowers are unisexual (very rarely bisexual), epigynous, actinomorphic (rarely zygomorphic, e.g. in Gerrardanthus or Xerosicyos) with five sepals and petals, which are entire, bilobed or fringed. Inflorescences are mostly produced in racemes, thyrses, panicles, or fascicles, rarely in spikes or umbels. About half of the c. 1000 species are monoecious, and in these species, inflorescences can be cosexual or unisexual. Shifts between dioecy and monoecy happened frequently in the evolution of the family and dioecy is most likely the ancestral condition (Zhang et al. 2006, Kocyan et al. 2007, Volz and Renner 2008, Schaefer and Renner 2010). The corolla consists of white, yellow, or orange (rarely red or pink) petals, which are highly variable in size, shape, and consistence. The androecium contains 3-5 alternipetalous stamens with 1-2 thecae. The stamens are often joint or connate in two pairs, sometimes connate into a central column or head. The anthers are mostly basifixed, the thecae are longitudinally dehiscent, straight or variously bent or folded (rarely forming a horizontal ring). Pollen of Cucurbitaceae is tectate to intectate, and grains are shed as monads, rarely as tetrads (Borneosicyos, Gurania, Psiguria). The pollen grain diameter is mostly between 50-100 µm but can reach up to 200 µm (e.g., in Cayaponia and Polyclathra). Pollen of the phylogenetically early-branching clades is always tricolporate and usually less than 40 µm in diameter. Pollen of Cucurbitaceae is usually covered with a thick layer of oily yellow to orange-colored pollenkitt.

The gynoecium consists mostly of (1-)3(-5) (semi-)inferior carpels. The stigma is entire, lobulate, or divided, placentation is parietal, the ovules are anatropous, bitegmic, and crassinucellar, horizontal, pendent, oblique, or ascendent. The majority (if not all species) of Cucurbitaceae seem to be self-compatible. The fruit is usually a soft-shelled or hard-shelled berry, less often a capsule (rarely samaras or achenes) with many seeds, one-seeded fruits are rare exceptions (e.g., in Sicyos and Sicydium). Geocarpic fruits evolved independently in one species of Echinopepon, Kedrostis, and Cucumis. The seeds are usually flattened, those of fleshy fruits may be globose, ovoid, pyriform (Halosicyos), falcate (Abobra), compressed (most cases), or even winged (Cyclanthera p.p.), usually surrounded by an arilloid jacket derived from the closest carpellary tissue (the ovular or seminal chamber) around the ovule. Seeds with wings predominate in Triceratieae, Gomphogyneae, and Zanonieae. The wings are unilateral (Gerrardanthus, Neoalsomitra, Zanonia), bilateral (Siolmatra), or peripheral (Alsomitra). The testa can be smooth, tuberculate, or scrobiculate, and it can bear spongy outgrowth (Apodanthera) or hairs (some species of Cucumis, Melothria, Indomelothria, Tecunumania, and Zehneria). The embryo is straight, usually oily, with two large, flat cotyledons. The cotyledons are often large, fleshy, ovate to elongate, green, and long-lived. Epigeal germination is the rule, hypogeal germination an exception (Zimmermann 1922; Parfitt et al. 1990). Haploid (gametophytic) chromosome numbers range from 7 to 24, with x=12 a prevalent number (Beevy and Kuriachan 1996). Most Cucurbitaceae contain oxygenated tetracyclic triterpenoids (cucurbitacins) with bitter taste and purging or abortive effect.

Pollen-foraging bees are the predominant pollinators of Cucurbitaceae, with several clades more or less oligolectic on cucurbits. About 86 species of Momordica, Thladiantha, and a few other genera have oil-secreting trichomes on the petal bases, and are pollinated by specialized oilbees of the genus Ctenoplectra (Vogel 1990; Renner & Schaefer 2010). Over the course of its evolution, Ctenoplectra has broadened its host spectrum from Momordica to the unrelated clades Thladiantha, Siraitia, and Telfairia. The squash bees Xenoglossa and Peponapis are specialized on the pollen of Cucurbita, and Andrena florea depends on the pollen and nectar of Bryonia. Hawkmoth pollination evolved independently in several genera that all have pale, usually fragrant flowers opening at night, often with nectar in elongated receptacle-tubes: Ampelosicyos, Cayaponia, Ibervillea fusiformis, Hodgsonia, some Lagenaria, some Momordica species, Peponium, Selysia, Trichosanthes, and Trochomeria. The conspicuously fringed petals of several of these species (Ampelosicyos, Hodgsonia, Linnaeosicyos, Telfairia, most Trichosanthes) evolved twice independently (Bellot et al. 2020) and likely are an adaptation to sphingid pollination (Vogel 1954). The Indonesian cucurbit Bayabusua with purple-red, hairy, fleshy flowers of unknown scent may be adapted to pollination by flies. Bird pollination is characteristic for Gurania and Psiguria; their bright orange to red flowers, often in dense heads or umbels, attract straight-billed hummingbirds. Species in these genera are also visited by butterflies of the genus Heliconius that depend on their pollen for protein (Murawski and Gilbert 1986). Bat pollination has been reported for species in the South American genera Calycophysum, Cayaponia, and Cionosicys (Vogel 1958, 1969; Sazima et al. 1996).

Dispersal is mostly by animals, more rarely by wind or gravity (ballistic). Wind dispersal of fruits or seeds occurs in Alsomitra, Bayabusua, Neoalsomitra, Pseudosicydium, Pteropepon, Siolmatra, Zanonia, and Sicyos. Typical bird fruits, i.e., red small fleshy berries, are common in Bryonia, Cucumis, Diplocyclos, and Zehneria. Larger fruits may be swallowed entirely by large birds, such as ostriches, emus, and bustards (Cucumis, Austrobryonia). Large seabirds, such as albatrosses, shearwaters and storm petrels, nest in habitats were Sicyos occurs and probably disperse the seeds, which can be glandular sticky or ornamented with retrorse barbs. Mammals are also important dispersal agents of Cucurbitaceae, although they probably destroy most seeds. Spider monkeys (Ateles) feed on Cayaponia (Link and Di Fiore 2006), and rodents burry and disperse Marah seeds (Borchert 2004). The geocarpic fruits of Cucumis humifructus are dug out and eaten by the aardvark (Orycteropus afer), which apparently also disperses the seeds (Meeuse 1962). Fruit bats and flying foxes feed on, and disperse, species of Guriana, Coccinia, and probably quite a few other cucurbits (Condon and Gilbert 1988; Medellín and Gaona 1999; Elangovan et al. 2001). In Luffa and Cayaponia, the fruit veins persist as a spongy web enclosed in the papery or leathery exocarp, which enables the fruit to float for many days in fresh or salty water (Ridley 1930). Other genera (Hodgsonia, Fevillea, Sicana) evolved large fleshy buoyant fruits apparently adapted to water dispersal. These observations fit well with the inferred transoceanic dispersal of several Cucurbitaceae between South America to Africa, and between the Malesian region or India and Madagascar and Africa (Schaefer et al. 2009).

Beevy, S.S., Kuriachan, P. 1996. Chromosome numbers of South Indian Cucurbitaceae and a note on the cytological evolution in the family. J. Cytol. Genet. 31: 65–71.

Kocyan, A., Zhang, L.-B., Schaefer, H., Renner, S.S. 2007. A multi-locus chloroplast phylogeny for the Cucurbitaceae and its implications for character evolution and classification. Mol. Phylogenet. Evol. 44: 553–577.

Renner, S.S., Schaefer, H. 2010. The evolution and loss of oil-offering flowers – new insights from dated phylogenies for angiosperms and bees. Philosophical Transactions of the Royal Society B 365: 423–435

Schaefer, H. and S.S. Renner. 2011. Phylogenetic relationships in the order Cucurbitales and a new classification of the gourd family (Cucurbitaceae). Taxon 60: 122–138.